Riders of Pennsylvania Transportation Authority’s (SEPTA) should expect to see more passengers of the canine variety on buses. Unlike Eclipse, the solo bus riding dog out in Seattle, most public transit riders are either K-9 officers or service animals in Pennsylvania. Other non –service animals are permitted on trains, buses, and trolleys as long as they are in approved carriers. However, launched in February, SEPTA is now allowing registered therapy dogs to become passengers as well. These dogs must be volunteering at two Philadelphia hospitals (The Children’s Hospital of Philadelphia and the hospital of the University of Pennsylvania) using two designated bus routes to travel. 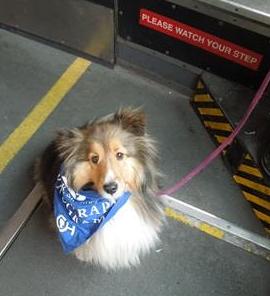 These four legged passengers can be identified by their therapy dog bandanas and the handlers must show their hospital volunteer ID. SETPA’s therapy dog programs willrun through September of this year. HUB and CHOP are hoping this program will bring more dogs in since transportation isn’t an issue. “Some of our current volunteers live in downtown Philadelphia,” said id Lisa Serad, program coordinator for the Gerald B. Shreiber Pet Therapy Program at CHOP. “If they don’t have a car, they need to take a taxi to the hospital for their assignments. The bus is much more cost effective and convenient.”

Philadelphia State Senate Andy Dinniman, supports Philadelphia and Pennsylvania hospitals and have even introduced a bill to the Pennsylvania senate pushing to allow therapy dogs to ride mass transit. “SEPTA’s pilot project recognizes the value of therapy dogs as well as their handlers’ need to sometimes use public transit to get to and from hospitals, senior centers, schools and other places,” Dinnima said. “And, what SEPTA is trying out on Bus Routes 40 and 42, I am trying to do statewide with my Senate Bill 640, which would make sure registered therapy dogs and their handlers have the right to use public transportation across the Commonwealth.”