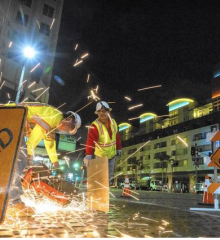 It has been just about a week since President Obama announced his FY2016 budget proposal. Ignoring budget gaps, he is proposing a record breaking $4 trillion dollar budget. With over 30 percent going to transportation, Obama feels America’s falling infrastructure is a top priority.

What could this mean for transit?

Soon, many may see mass improvements in transportation across the nation. Places like Utah County, where their Provo-Orem Bus Rapid Transit Project has reportedly been awarded $71 million from a Small Start Grant, are already planning.

This could mean much improvement in shelters on cities streets, more routes and better service. Many are moving away from the traditional transportation system and upgrading to better ones including adding interactive mapping systems to bus shelters, solar energy and creating a more pleasing environment while waiting stops.

With $1 billion proposed to come their way, Californians could see enhancement to everyday commuting. Construction of Section II of their Purple Line Extension Project is already underway. Hopefully, this brings much business to manufacturers for site furnishings and updated shelters.