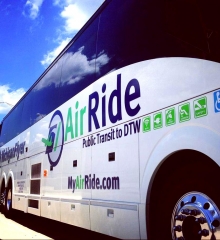 Metro Detroit could see another transit service coming that has service to the airport. The Regional Transportation Authority of Southeastern Michigan (RTA) is pushing a proposal that would link Wayne, Macomb and Oakland counties, to the airport. Its plan is to use Ann Arbor’s AirRide service to bring people from surrounding cities to the Detroit Metro Wayne County Airport.

AirRide, a public service that charges riders $12 per trip in Ann Arbor, makes 13 trips per day and stops at the McNamara and North terminals. The buses offer bottled water and bathrooms. According to Ann Arbor Area Transportation Authority, ridership had increased from 58,000 passenger trips from 2012 to about 71,000 in the past year.

Funding is a huge determining factor in order to get started. Other factors such as cost of service, determining drop-off/pick-up locations are also components. Potential locations that meet federal accessibility requirements and long-term parking have to be considered as well.

Faster and cheaper transportation to the Airport could mean travelers save more money. Taxi’s, rental cars, and limousines are huge out of pocket expenses, especially for those that live farther into the city. Airport employees and frequent flyers could also benefit from the long-term parking at each drop-off/pick-up location instead of higher daily rates at the airport.