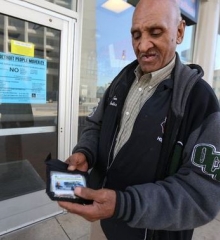 A $100,000 study funded by the Michigan Department of Transportation is under way to see how a universal fair card would benefit the four transit agencies of metro Detroit, DDOT, SMART, Detroit People Mover, and the Ann Arbor Area Transit Authority.  The M-1 Rail, although not under Regional Transportation Authority like the others, has also been at the table in discussion to make it easier on passengers to pay using one system. The fare card would allow riders an easier option to pay for fare without the struggle for change.

There is no way of telling how many riders may actually purchase a fare card, however, the four transit agencies submitted figures totally around 9.5 million passenger boarding’s for the 2014 first quarter. This gives a strong possibility of a much interest. Similar systems in cities such as Atlanta, Sacramento, Minneapolis, Seattle, etc. have been under review.

“This is the future. This is where we’re moving so you need that convenience and flexibility because people obviously pay all sorts of ways now with plastic or some medium like that,” said Henry Cornelius a transportation specialist with the People Mover.

All systems offer passes but most use cash or coins as a major form of payment. Ann Arbor Area Transit Authority primarily relies on ride passes for passengers. SMART and DDOT are the only two that have the option to pay for a monthly pass card interchangeable.

Advance options could include enabled state issued bridge cards having the ability to pay for fares or gift cards. Implementing a system such as this would cost millions. A big hurdle would be funding possibly ranging from $6.3 million to 22.8 million.