May is National Bike Month 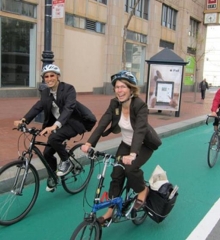 In celebration of National Bike Month many cities nationwide are showing their bike pride for the month of May. Established in 1956, National Bike Month encourages people to try out a different mode of transit – on two wheels. Sponsored by the League of American Bicyclist, this month aims to showcase the many benefits of biking and pushes for more community support. Last Friday, May 1st marked the beginning of Bike Month and it kicked off in such cities as Detroit and Ann Arbor with the Commuter Challenge. Other events can be seen happening from city to city this month including National Bike to School Day on May 6 and National Bike to Work Day on May 15.

With cities becoming more bike friendly for communities, a call for change in city infrastructure has pushed officials to include bike lanes and bike parking to their transit budgets. Laws and regulations have been implemented to protect riders from motorists on their daily commutes. With bike friendly communities now in every state, some more than others, the movement has significantly grown over the years.

Biking for transportation and recreation is a great way to eliminate motorist’s emission and pollutants that damage our air quality and environment. It also has an added benefit of reducing traffic and improving quality of life through better health. Last year the League of American Bicyclists reported its 2013 numbers with Ann Arbor, Michigan ranked 1 for top bicycle communities in the Midwest with 5.5% or 3,124  commuters traveling by bike. Detroit also appeared on their list ranking high as the fourth fastest growing bike commuter city at 438.3%.