Dallas Streetcar Back With a New Look

Home / News / Dallas Streetcar Back With a New Look 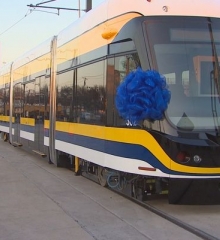 After a nearly 50 year break, the streetcar in Dallas, TX is back. DART, Dallas Area Rapid Transit is overseeing this city of Dallas project, transforming Dallas into a transportation hub. The new modern-era streetcar resumed service on April 13, 2015 with a state of the art electric rail system.  For now, the street car travels a 1.6 mile route from downtown’ s Union Station to Oak Cliff’s Methodist Dallas Medical Center.The project was funded by a $26 million federal grant according to DART.

The streetcar travels parallel to Trinity River corridor, which separates southern Dallas from the city’s central employment district. The plan was to target commenters in districts near downtown and help them connect to other transit options in the city’s center. Unlike the last streetcar in Dallas in the 1950s, this one is more modern and sleek featuring air conditioning and a all glass feel.

A second phase is planned to extend routes to high populated shopping and dining areas of Oak Cliff. An expected completion is set to 2016. A third phase is still in the planning stages. This segment is forecasted to expand the line to the Kay Bailey Hutchison Convention Center and Omni Dallas Hotel.

“Dallas is taking another notable step forward in its efforts to build an efficient, reliable and connected transportation network that helps grow the region’s economy and connects hard-working families to jobs and opportunity,” said FTA Acting Administrator Therese McMillan. “We’re calling on Congress to pass a long-term transportation bill that will make more projects like the Dallas Streetcar a reality.”