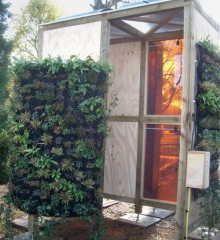 Cambridge University has developed a prototype “green” bus shelter. The shelter, being called the “greenest bus shelter”, uses a series of solar panels and “plant power” which can generate enough electricity to light itself.

Design by Ely based architects, MCMM Architetura, the wooden hub was created from eight green plant wall and six solar panels. The panel walls harvest electrons from photosynthesis and metabolic activity which eventually converts into an electrical current.

The idea was formed by Professor Christopher Howe and Dr. Paolo Bombelli at the University’s Department of Biochemistry. Their solar hub provides energy during the sunlight hours and the plants provide the electrons needed both day and night.

“Ideally you can have the solar panels generating during the day, and the biological system at night,” Dr Bombelli said.