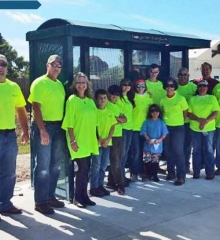 Last month, Sarasota County Area Transit, Boy Scout Troop 26, Venture Crew 26, the Englewood Chamber of Commerce, and other community supporters pitched in and helped construct a new bus shelter and bike rack for the community from Brasco’s TechLine series. The event took place on February 7.The shelters were placed on Hosmer Avenue in front of the Englewood Chamber’s building. The new shelters replaced the existing one in front of SCAT.  This bus stop is Englewood’s southernmost bus stop in the city.

There were about 20 leaders and youth from the Boy Scout Troop 26 and Venture 26 that participated in the construction of the shelters. Both were sponsored by the Lemon Bay Sunrise Rotary Club.